A few years ago, I was invited to a baby shower in honor of a childhood friend.  My job was to make cookies, of course.  She sent me pictures of her bedding and we came up with some designs which I made into cookies.

Now I don’t know if I’ve mentioned it, which is really a lie, because I mention it all the time…I live in a pretty rural area which happens to be about seventy miles from where the shower was going to be. That morning I left extra early so I could deliver the cookies with time to spare.

Things went well until I arrived in my friend’s very small {as in population 800} town.  If there ever was a person who could get lost in the smallest {not really..they get smaller} town in Texas, it’s me.  And apparently I am part man or something because instead of immediately calling for directions I continued to drive around convinced that a large brick house flanked with pink balloons would be easy to find.

Or not.  About fifteen minutes before the shower was over my worried friends were finally able to get in touch with me.  Did I mention tiny West Texas towns also have sketchy cell phone signal and I somehow managed to stay on the side of town where my phone did NOT work?  Yeah…

Anywho, I was embarrassed, frustrated, and a little bit sad that I  missed the party but everything worked out in the end.  Everyone had cookies  and my buddies hung around while we caught up with each other’s lives.

Anywho, fast forward a year or two and it seems that once again, I am late to the party.  Today was the day of my sweet friend Kristan’s baby shower and somehow, I was late again.

But finally, I’ve made it and I have with stenciled Damask cookies to match the bedding that Kristan picked for her sweet little Lucy Lu.

I hope you like them, my sweet friend, along with the impromptu after-party! 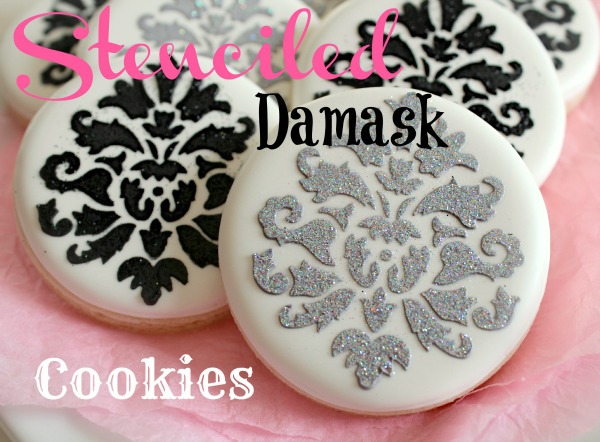 and this nifty little damask stencils that I got from Designer Stencils.  They also have another set in a different design, but this one is my fave. 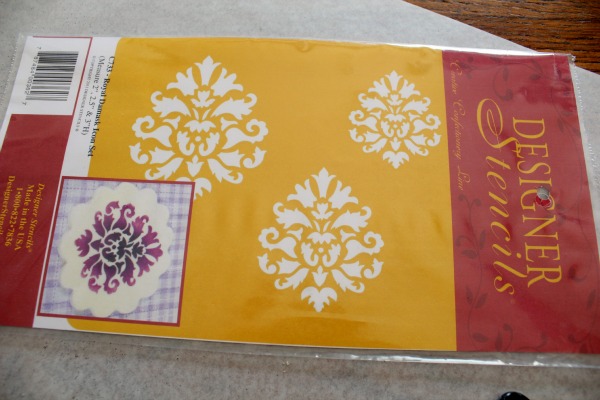 Before stenciling on the cookies you will need to outline and fill your cookies.  Make sure that the cookies are the correct size for your stencil.  Bake and ice one extra cookie to use as a support while you’re working {this will make more sense in a minute or two}. 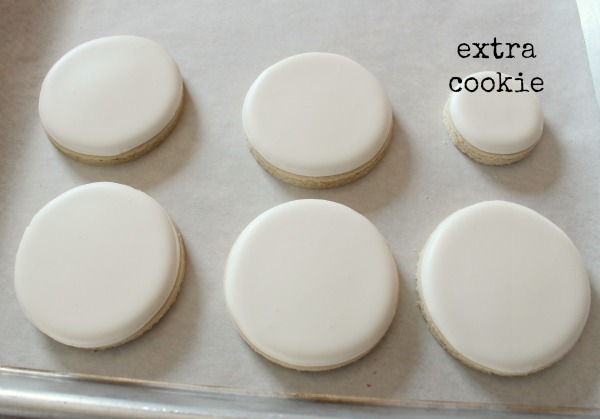 Be sure to have all of your supplies ready, you won’t be able to move very easily once you begin.  Begin by positioning the stencil on the blank iced cookie.  The guide cookie should be neat the cookie you are working on, so that you can use it to keep the stencil securely in place.  Try to make sure the design is centered on the cookie. 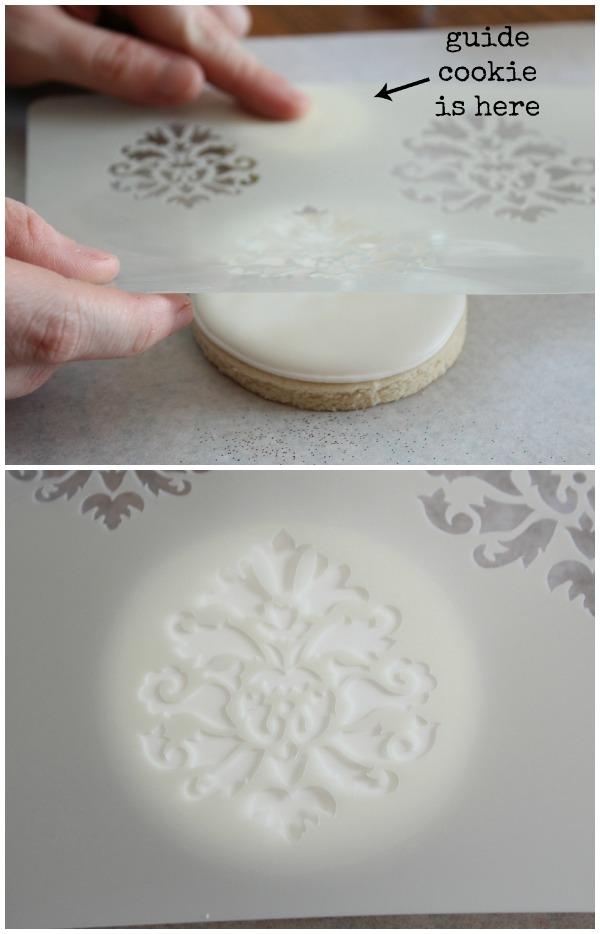 Next, pipe a generous but not excessive amount of icing directly onto the spatula.  This is a little trick I learned from Karen’s Cookies that really rocked my world. 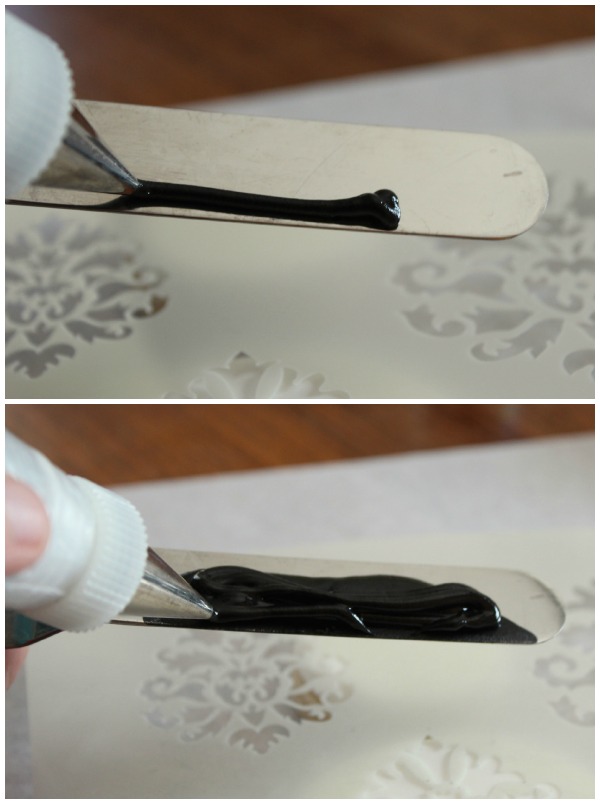 Holding the stencil firmly in place, spread the icing in a even thin layer over the design.  I find it’s easier to spread away from myself but do what works best for you.

Before removing the stencil I added a sprinkle of disco dust for sparkle. 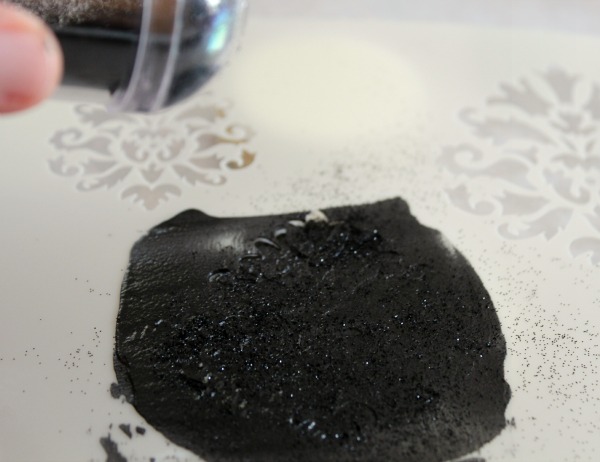 While continuing to hold the stencil firmly in place gently lift it up and away from the cookie.  Do not let it slide around or it will smudge. 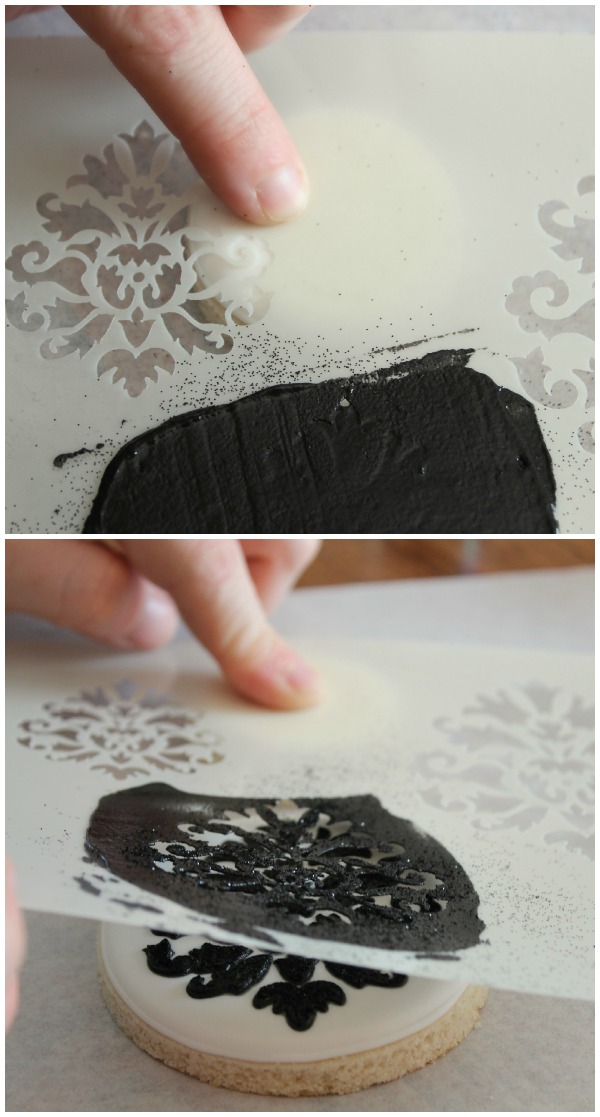 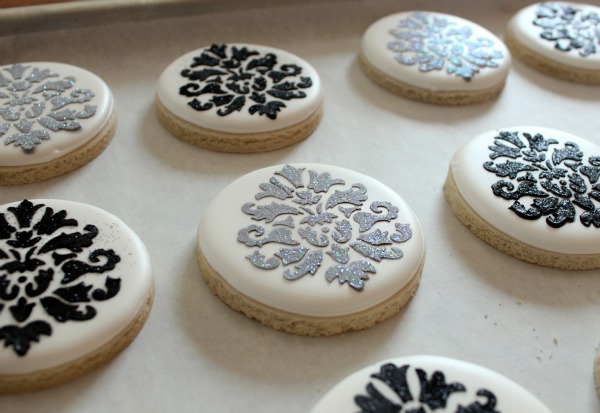 One of the  best tips I can give you for stenciling on cookies is to try to spread the icing over the stencil as thinly as possible. 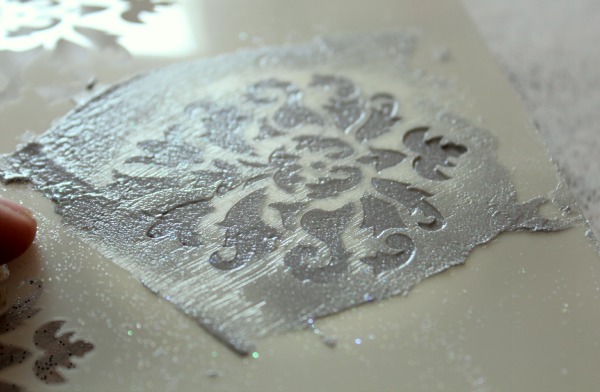 If you don’t, you may have buildup in certain areas.  Can you see it?  Nothing to freak out about but I think a thin layer looks much cleaner. 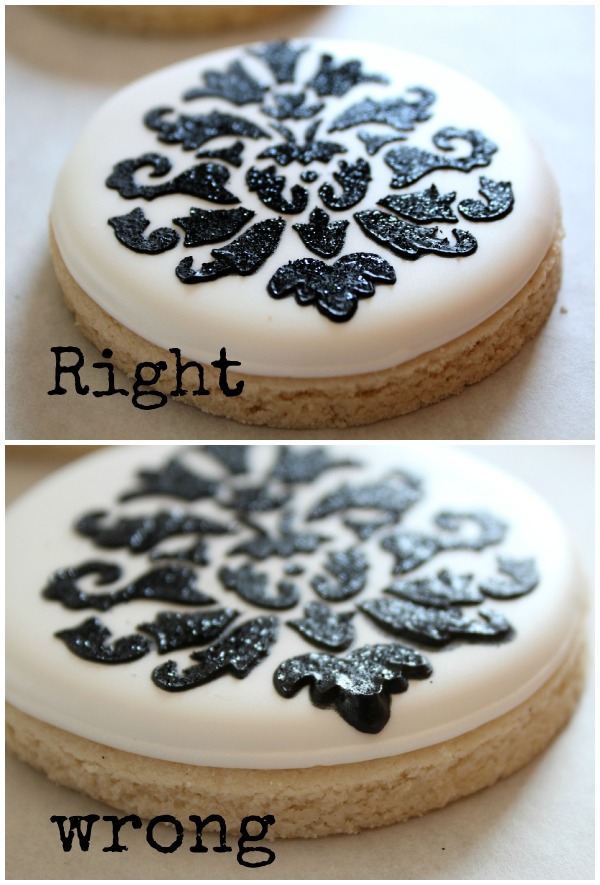 If you don’t know Kristan, you need to.  She’s the author of one of my favorite blogs, Confessions of a Cookbook Queen.  I met her during the early days of my blogging adventure.  I’m pretty sure that when Kristan was in school she was the girl who befriended the {slightly clueless and terrified} new kids in school and let them sit at her lunch table, because that’s what she did for me and it really meant more to me than words can express.

I love vising her blog, especially when I need a laugh.  As a matter of fact, I wish it was her rather than me telling the story about my habitually late shower arrivals.  It would have been way funnier that way! 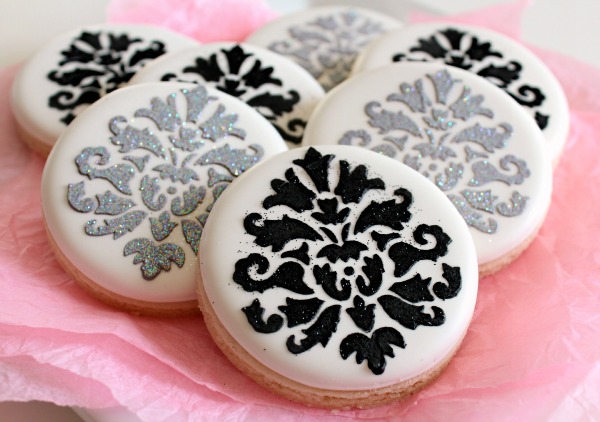 Before I was unfashionably late I mentioned that this is supposed to be a baby shower, right?  Well, the rest of Kristan’s buddies not only made it on time, they also brought treats.  You should definitely make the snack table round and check out what Kristan’s punctual pals made. 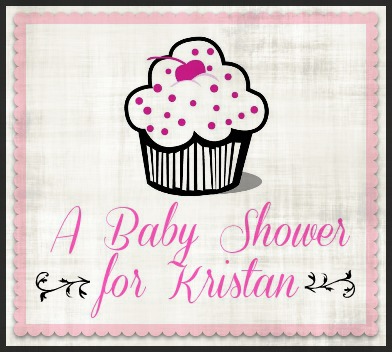 But seriously, Kristan, we love ya, and are all super excited meet little Lucy and watch her grow!