I know what you’re thinking.  PIE?  On a cookie blog?

No, I haven’t gone to the dark side.  No pies from this gal.  No matter how badly I want to make  beautiful, perfect pies, for the time being, it’s not happening.

So, even though I cannot make pretty pies, rather than miss the party altogether, I’m doing pie, but I’m doing it the COOKIE WAY!

Here are the pies, and here’s their story….

Once upon a time, there was a girl who wrote a cookie blog.  Right before Independence Day, she had this AMAZING idea.  It involved pie and the phrase,”as American as apple pie”.

She thought, “Wouldn’t it be cute to make patriotic pie cookies?”

Then she remembered that her cookie friend, who we’ll call Ali-bee, had already made the most AWESOMEST pie cookies she’d ever seen.

Rather than mess with perfection, bloggy girl decided to ask Ali-Bee to do a guest post.

Ali said yes, and everyone was happy, UNTIL…bloggy girl blew it.

As usual, she got busy, and by the time she realized she’d FORGOTTEN to post the pies, Independence Day had come and gone.

You can imagine her embarrassment and SHAME.

Late one night, bloggy girl was up thinking and she remembered the pies.  Suddenly it occurred to her that Thanksgiving would be the PERFECT time to bust out the forgotten tutorial, and totally redeem herself .

A little late, but definitely better than waiting until next July, right?

So, in case you’re wondering why Ali-Bee would make red, white, and blue Thanksgiving pies, the answer is, she WOULDN’T.  She would make patriotic pies in JULY just like her pal asked her to. 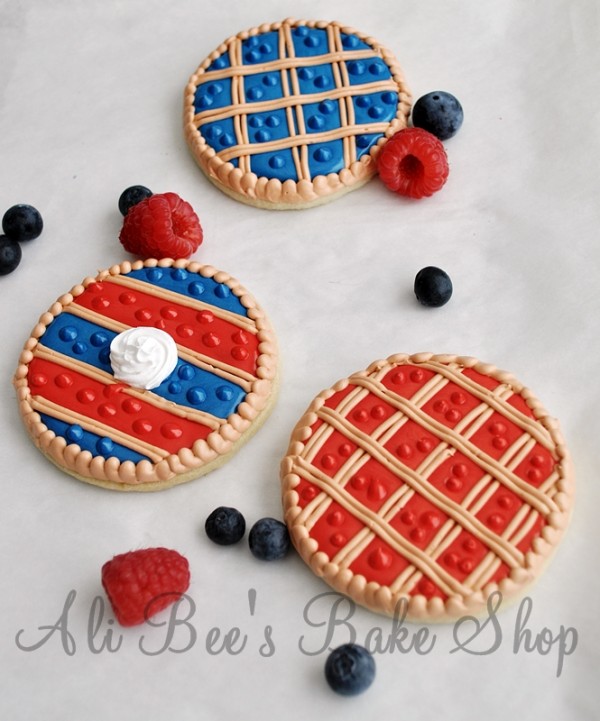 Now that that’s all explained,  let me tell you how it’s done.  First, use piping icing to outline the cookie with crust colored icing {try ivory americolor} and fill with whatever color you’d like the inside of the pie to be. 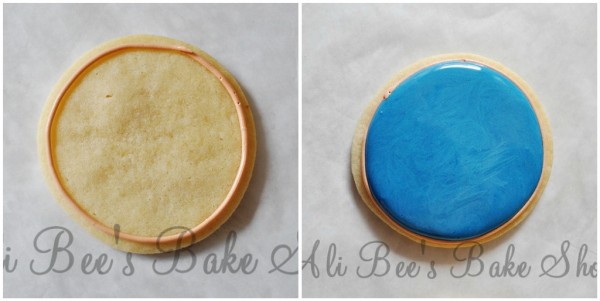 Next, use the crust icing to make a lattice pattern on the cookie as demonstrated below.  I’d suggest a #2 tip.  Let the cookie dry for an hour or so before moving on. 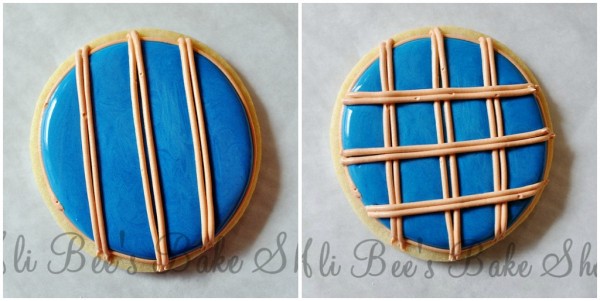 To finish, use the same crust colored icing to pipe a decorative crust around the cookie.  If you want to get really FANCY, use a #13 or #16 tip.  Then use flood icing to add “berries” by dotting it on the dry base color. 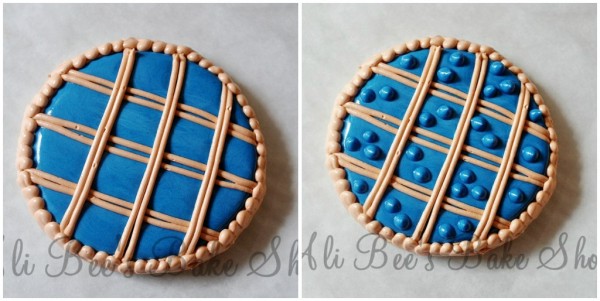 These particular pies are blueberry but you can easily make cherry, apple, or shnozberry with just a few changes.

A circular cookie, two colors of icing, and voilà, one of my MANY Ali-bee faves. 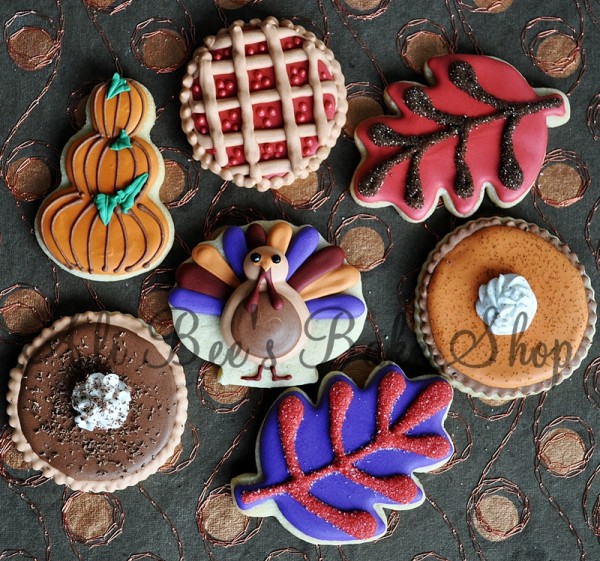 I should also mention, this guest post came with words, that the bad bloggy friend misplaced, and rather than face the shame of asking poor Ali-Bee to redo that part, bad bloggy girl made up the instructions herself.

I’m thinking Ali-bee might need a little comfort after being treated so badly by that mean old girl who cannot keep up with her business.

So, head on over to her blog, Ali-Bee’s Bake shop, and give her a big ol’ hug and tell her how wonderful she is and that you’re SORRY she has such a terrible bloggy friend.

Meanwhile, to punish myself…er, um, I mean as punishment, I think that mean old bloggy friend should spend all weekend cleaning bathrooms with not one speck of cookie decorating.  I think her husband would probably agree!

Oh yes, and if you aren’t pie challenged like I am, don’t stop here.  Be sure to swing by TidyMom’s 3rd Annual Love the Pie Party.  It’s just as much fun as it sounds.

But seriously, thanks for putting up with me, Ali.  You’re amazing!

Have a wonderful weekend everyone!