Did you know that April is Autism Awareness Month?  It is a month dedicated to increasing awareness and educating the public about autism.

A few weeks ago, I was approached by my friend Mique about doing a special project for Autism Awareness.  I personally haven’t had much experience with autism, however,  as the mother of an autistic child, this campaign is very near and dear Mique’s heart.

I have to say, I have learned a LOT over the last few weeks and I am glad to share my latest project with you.

With the help of many generous friends, this is what I came up with… 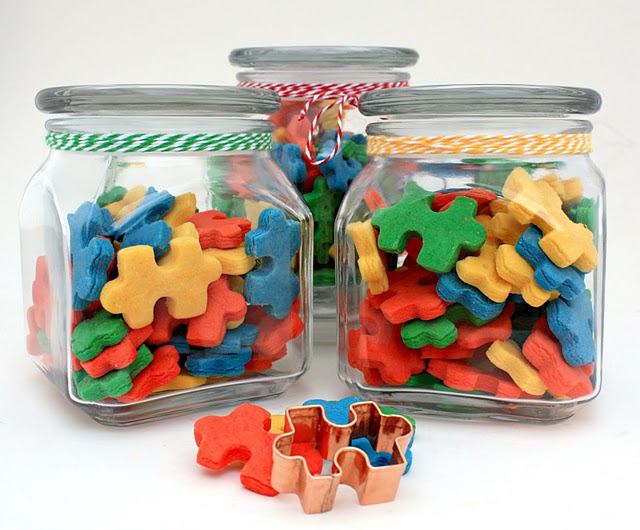 These cookies are very simple, but they still make a big impact.
I chose the idea of cookie jars because they can be used in many ways.  I thought they would make great gifts for parents or teachers of autistic children, or a great fundraiser idea because they are very simple and inexpensive to put together.
When I first began thinking about this project, I began scouring the Internet for mini-puzzle cutters. However, I quickly became worried. There just weren’t any available.
Normally, I would just mangle some unsuspecting cutter, but this was a special project and it warranted a special cutter.  I immediately knew the perfect people for the job.
I contacted Copper Gifts, and described to them what I had in mind.  This is what they made and  I couldn’t be more pleased. 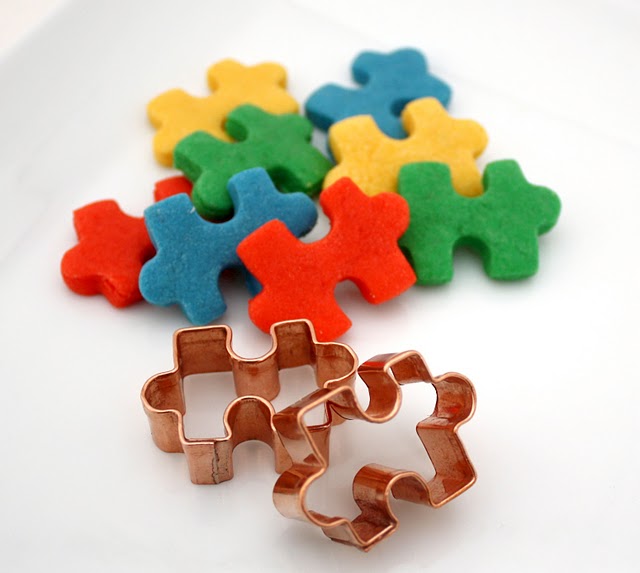 To make it even better, they volunteered to donate two dollars from the sale of every mini-puzzle cutter to autism research.  I was overwhelmed with their generosity AND as always, completely amazed with the craftsmanship of their cutters.
{click on the photo above to purchase a mini-copper cookie cutter}
To make these cookies, I simply separated my cookie dough into four equal pieces and kneaded in about ten drops of Americolor soft gel paste.
The colors I used were leaf green, royal blue, egg yolk yellow, and tulip red. 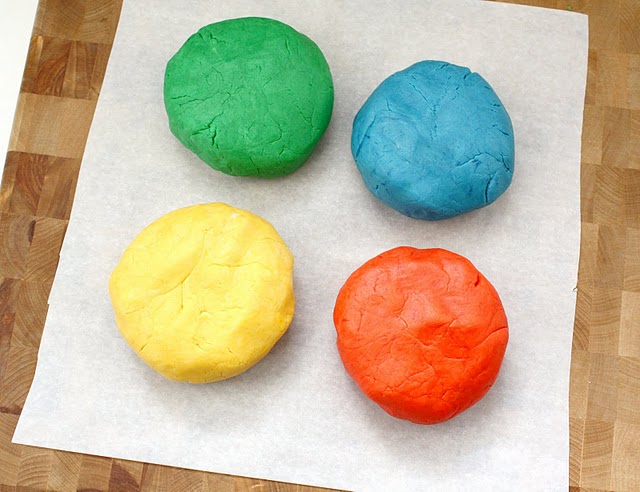 After I  finished, I wrapped each ball in plastic wrap until I was ready to roll it out.
Notice the little bowl of flour I have on my workstation?  This is the secret of mini-cutters. Every few cuts dip it into flour so the dough doesn’t stick to the cutter. 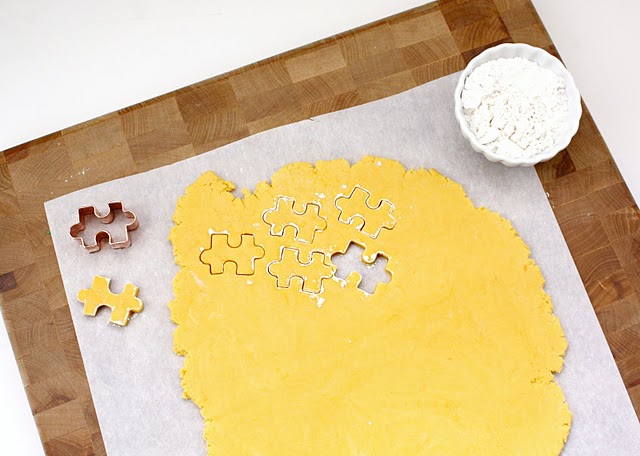 Many mini cookies later, this is where you’ll end up. 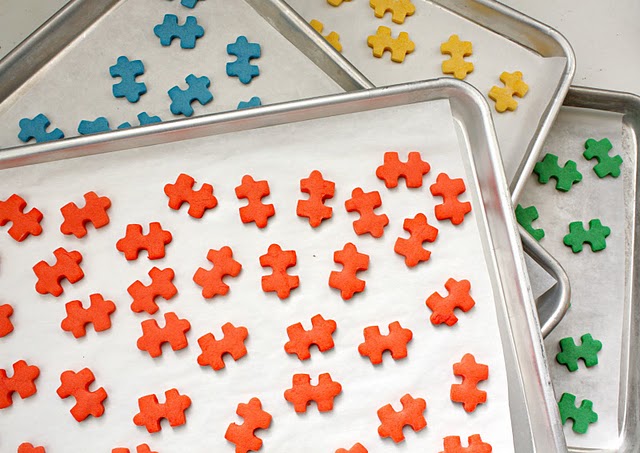 Now, in the middle of all this, you might begin to think, “Geez, this is taking forever…”  HOWEVER, compared to the time it would take you to flood all these babies, this is nothing!
As I mentioned before, I wanted to come up with a cookie idea that could be both a gift, or something appropriate for a fundraiser, so I asked Mique if she could make some cute little jar labels for both occasions.
This one is a little more casual, 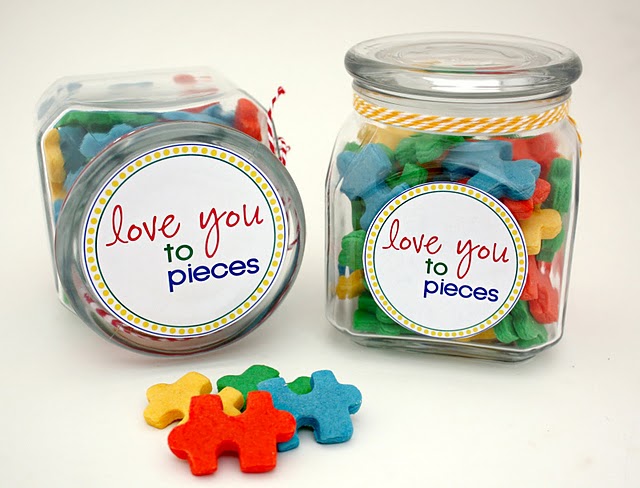 while this one gets straight to the point.
To print your own, head on over to Mique’s blog by clicking on one of the photos.  And if you are wondering about the colorful twine, I highly recommend the colorful bunch sampler pack from, The Twinery.  It was PERFECT for this!!! 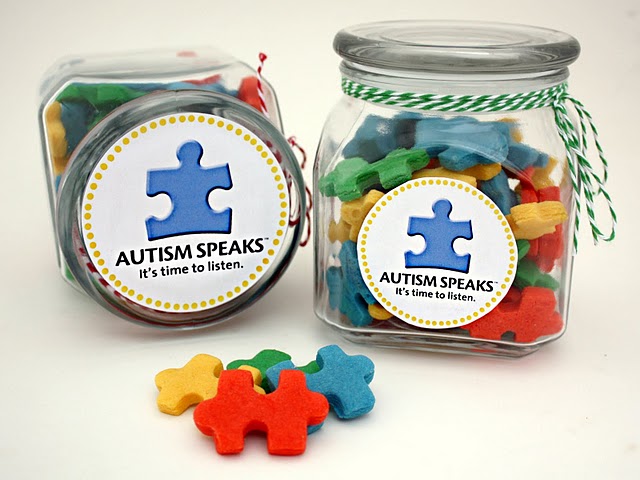 Now, if you aren’t really familiar with how this thing works, USUALLY I do the cookie half, and Mique does the printables and her own little “spin” for the people who might not have the time or desire to make cookies…{although I cannot imagine such a person exists ;)}
But for some reason, I was feeling a little pushy.  Maybe it was because I didn’t get to use the larger puzzle cutter myself, or maybe just because I am shooting for worldwide cookie domination.  In any case, I really wanted her to do a project that involved COOKIE CUTTERS soooooooooo, I might have been a little bossy, but I am sure glad I was =)
Isn’t she good?  These are so PRETTY! 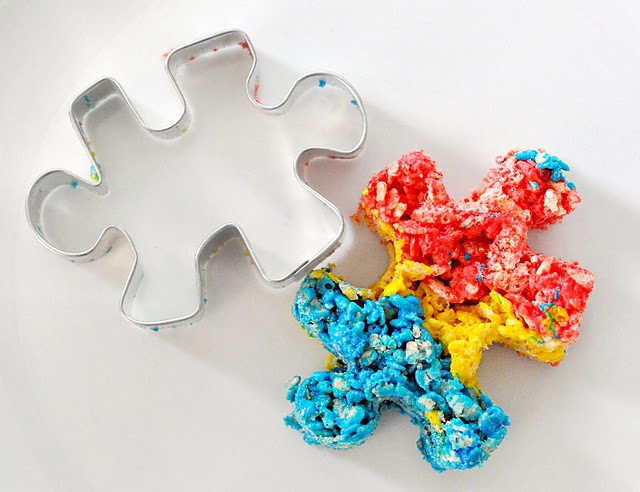 If you don’t have this cutter, you can find it {and tons of other toys} at Sweet Baking and Candy Making Supply {Click on the photo below}

I would also like to send one jar of cookies and a Copper Gifts mini-cutter to one reader.  All you have to do to enter is leave a comment telling me about your favorite Autism Awareness Month project, or if you have been personally affected by autism.
Last day to enter is Friday at midnight CST.
Only one entry please, and entries without contact information will not be eligible to win. 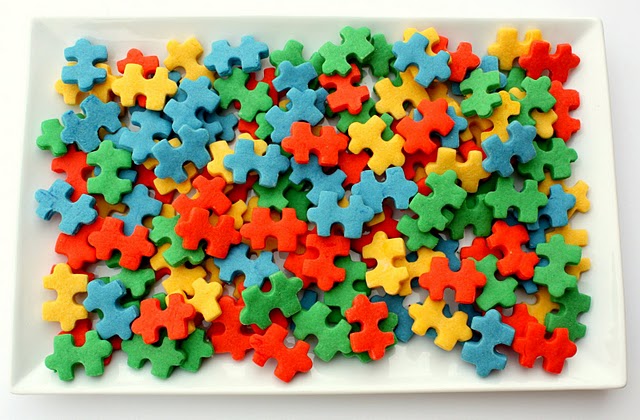 I would like to give a special thanks to ?Raymond and Beth Braman of Copper Gifts for working with me on this project.  They were AMAZING, and also to The Twinery.
And of course, Mique.
If you would like to donate time or money to autism research, click on the button below. 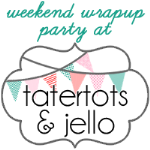