Okay T minus 2 days till Christmas.  Chances are the cookies have been baked and decorated so I’ve decided to share another Christmas sweet, Fruitcake Krispie Treats.

Technically this isn’t a cookie, but it’s close enough.  It’s actually one of my Mamaw’s BESTEST recipes and a family favorite so I’m pretty excited to share it with you! 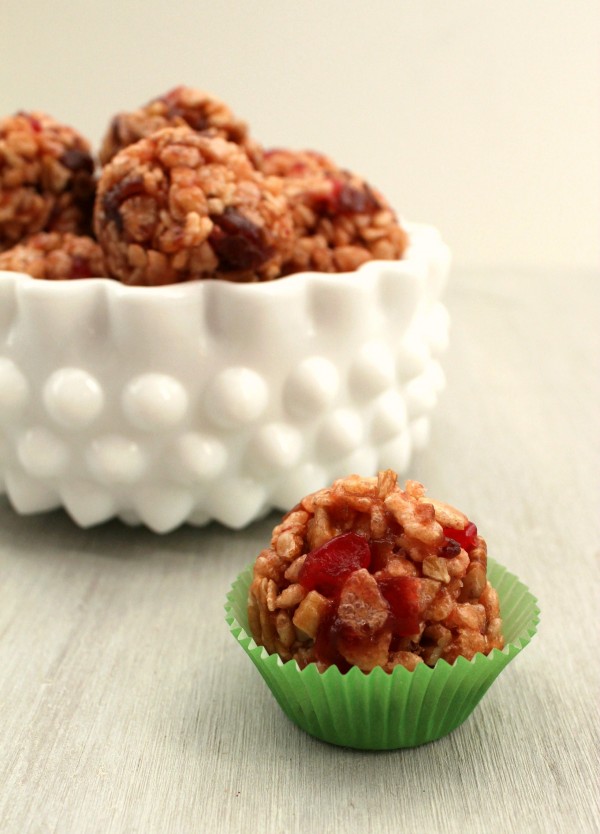 I should tell you though, in my house, we don’t actually call these Fruitcake Krispie Treats.   My friend Ali helped me make up the nice name a few days ago.  Until then, these were known as Date Nut Balls and Holy Crap.

My family could be the Griswolds, except they live in the country, which multiplies the Christmas Vacation factor exponentially. Imagine Clark and cousin Eddie’s love child, and you’ll have us…

Anyway, I made up a nice name for these because am kind of averted to referring to ANY dessert as BALLS. Especially on the Internet. “Cake Balls” is bad enough, but add the word DATE, and seriously, it’s almost an instant turn-off.

Yeah, I didn’t think so.  I’m pretty sure you’d just snicker like my brothers do.

He was visiting for Christmas a requested a “big” date nut ball, so to be funny, I indulged him.  I made a softball sized ball just for him. When I handed it over, he immediately says, “HOLY CRAP!”

I didn’t think much of it until few hours later when Caleb comes to me and asks for some Holy Crap.  At first I was a little disturbed that my two year old was walking around saying holy crap , then, after a ten minute game of point and guess, I realized he was asking for a Date Nut Ball.

Of course, I wasn’t thrilled about his lovely new vocabulary word, but I guess it could have been worse. We couldn’t help but laugh and after that name #2 was born.

Now that my kids are old enough to know crap is on the “BAD WORD” list, they often call them, “Holy you-know-what”, but the memory still makes me smile. 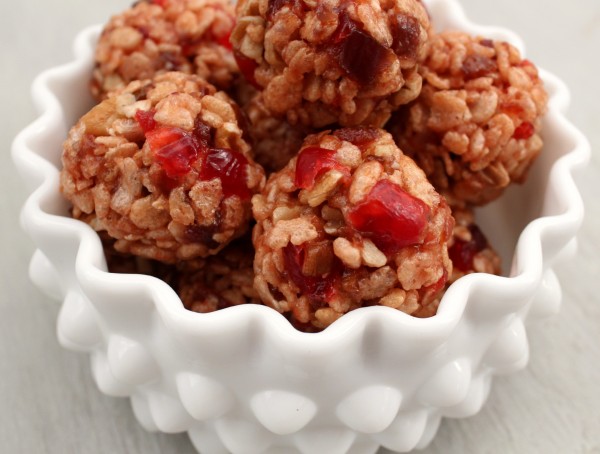 This recipe is quick and easy enough to make in 30 minutes.  Begin by adding cherries, chopped dates, sugar, and butter to a medium saucepan. 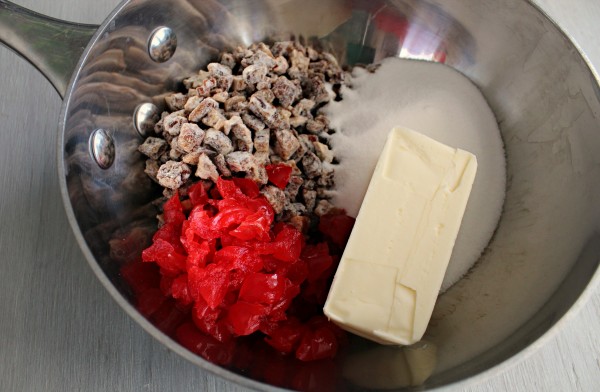 Cook over medium heat.  At first when the butter melts it will be watery and look kind of like Christmas barf.  Don’t worry.  This is normal. 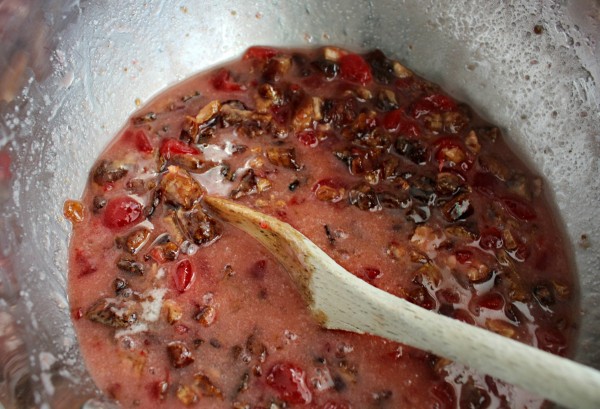 As the dates and sugar cook down, the mixture changes from Christmas barf to a thick sticky paste.  This is exactly what you’re going for.  Be sure not to cook it too far.  If you do, the final product will be tough and sticky. 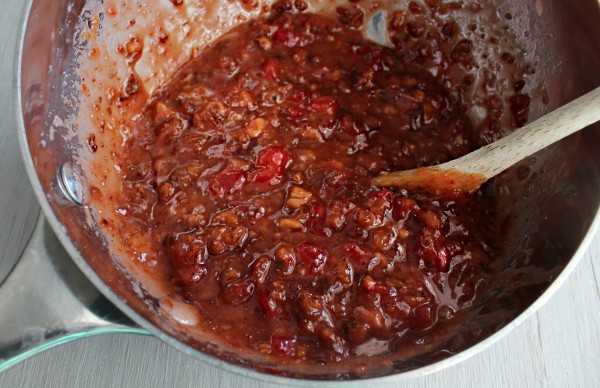 When the paste is ready, quickly spray a large bowl with non-stick cooking spray and mix the Rice Krispies and pecans. 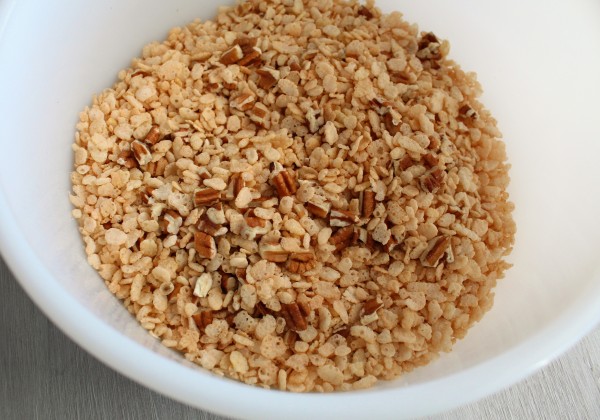 Pour the paste over the cereal and mix well. 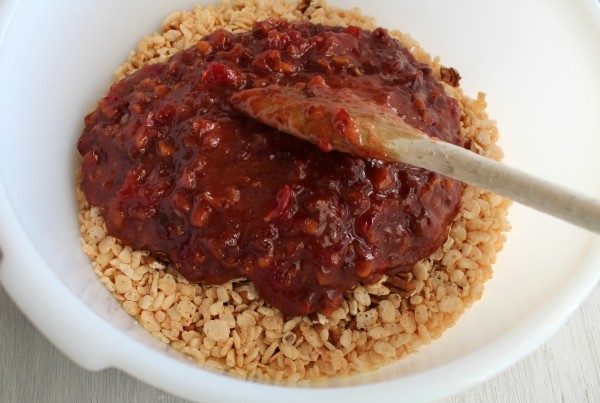 After it’s mixed, it should look like this.  At this point I always let it cool for a few minutes before forming it into balls, which is probably a good idea for anyone who’s not into second degree burns. 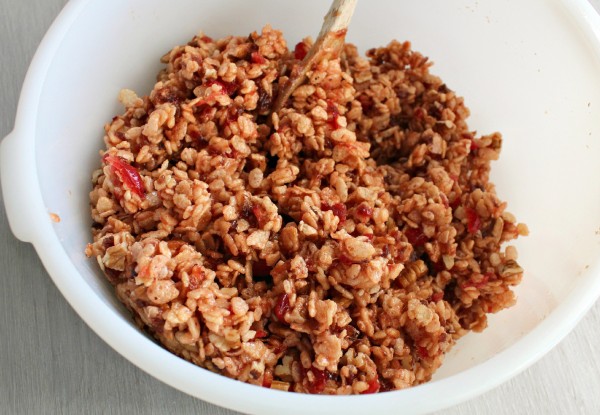 Finally, I used a tablespoon measuring spoon to form perfect little fruitcake balls.  I make mine a little larger than Mamaw did.  It makes me feel like I didn’t eat quite as much when four does the job of eight. 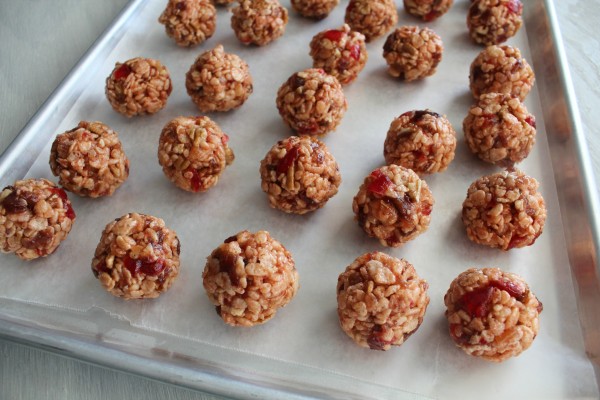 Let them cool and you’re ready to go! 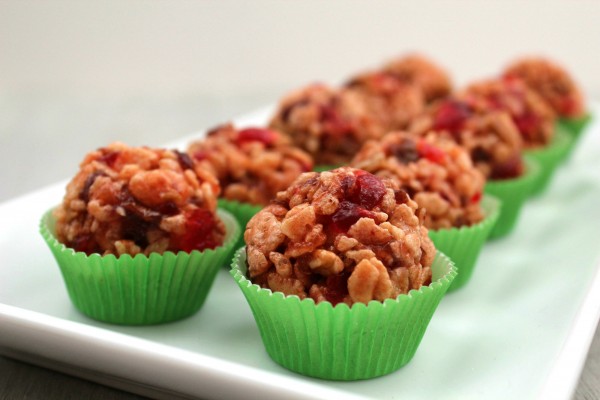 I know many of you might freak out about the fact that these have dates in them, but please don’t. Even the pickiest of eaters love them.  I often take them to parties without mentioning what’s in them, and by the end three or four people have asked for the recipe.

I hope you enjoy these as much as we do.  If you’d like to see more family favorites, my mom does a good job of keeping up with them HERE.  She also makes a pretty MEAN fruitcake…I think.  We’ve yet to actually try it.

All joking aside, I hope everyone is having a great holiday season.  If you haven’t entered my giveaway, there is still time, just click HERE.

Merry Christmas from my family to yours!