Home » Sweet Sugar Belle » To KopyKake, or not to KopyKake, that is the Question!

January 19, 2011 | 37 Comments »
“Do you have a KopyKake?”
That is is probably the number one question I get.  The answer, yes.  I ordered mine last April or May after an all-nighter  that produced a less than mediocre set of Princess Tianas.  {There might have been tears involved}
When it first arrived, I immediately put it together.  I was so excited!  However, the excitement soon turned to disappointment.  It wasn’t exactly what I thought.  It did project, but since a cookie is already tiny, the tiny projection was almost minuscule and VERY hard to see.  Also, I had to be very careful of what direction I approached the cookie from.  If I put my hand in the wrong place, it blocked the image.
Worst of all, it couldn’t do what I bought it for in the first place, help me with character cookies.  There was no way for me to project an image and still make a cookie that wasn’t gigantic!
So into the closet it went.  Bern Dogg was not impressed with me because they are a little pricey, but I didn’t know what else to do with it.
Finally a few months later, I decided to give it another shot, however, this time I approached it in a different manner.  Instead of expecting it to be a tracing machine, I learned to use it as a guide.  This is when my KopyKake and I became friends.
*Before I get started, I should tell you this…if you are making 30+ dozen cookies a week like I used to, don’t even read this post. GO BUY ONE NOW!!!  Do not pass go, do not collect two hundred dollars, just do it.  You will thank me.*
However if you are just a weekend cookier, don’t waste your dough…there are other ways to get the same effect, as I will show later this week…
I say this because truthfully, 95% of the time, this is exactly how you will find my KK. 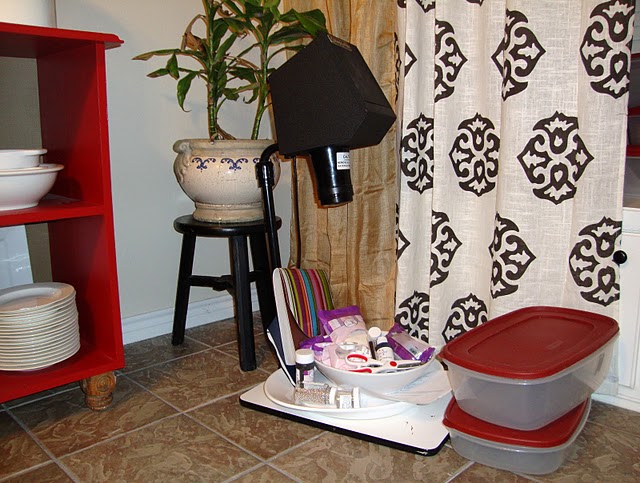 {Actually that isn’t an entirely accurate photo. Its ALWAYS a dumping ground, but usually it’s shoved back between my plant stand and china cabinet so I don’t trip on it}

…and now you know my other dirty secret, I hang curtians straight out of the package without ironing them!

Bottom line, even though I don’t use it much anymore, when I need it, I NEED IT!!!

My #1 most favorite thing about my KK is that it makes a 2 hr job into a 30 minute job.

Pre-KK, I would have to literally draw my design onto EVERY single cookie.

My KK eliminates that.  Now, I just draw it once, and it’s a piece of cake {or cookie on this blog} from there on out.  You might recognize some of my scratchy sketches that turned into cookies…

Not too shabby, eh?
For those of you interested in a KK, take some of time to consider before you commit.  I love mine, but now that I am a hobbyist only, it’s almost just an ugly lamp.
Still, in our heyday, we had a beautiful thing ???
So, to those of you who asked, I say this.  After we got to know each other I decided a KopyKake could be a wonderful thing,  *His name is Stanley, BTW*
Keep in mind, it’s not a magic machine.  If you cannot pipe a straight line, or progressively design a cookie, it’s scrap metal.

Also, it isn’t made to help if you want to write tiny.  Been there done that.  Save yourself the stress.  It just doesn’t work…

If you are on the fence, stay tuned.  Tomorrow I will show you two ways to get the same effect without a projector.  Then you can decide whether or not to invest in a KopyKake of your own =)
Sweet Sugar Belle
37 Comments »