Do you know what happens when you grow up three miles outside of the middle of nowhere?

Since I’m guessing most of you DON’T, I’ll tell ya.

By default, you become a nerd.

I think it has something to do with  having to rely on your own imagination for entertainment.

When town kids get bored, they walk outside and play with a neighbor kid.  That wasn’t the case for us.

We played Little House on the Prairie (when my brother wasn’t pouting because he had to be Mary) and shot at rocks with our BB guns.

We didn’t watch a lot of TV because our flying saucer-ish satellite dish was often on the fritz, (maybe because we used it for target practice) but if we did watch something, it was usually movies. Dad’s movies, to be exact. The tape kind.

Anyway, our choices were Dune, Ferris Buller’s Day Off, Back to the Future, Star Wars, and Star Trek.

So, while my brother was busy learning to “mind meld” and speak Klingon, I memorized Ferris Buller’s every word and fell in love with Star Wars. I guess when you watch a movie six times a week, it grows on you.

As a result, I’m now on a quest to become the Jedi master of Star Wars cookies.  This is my latest attempt. 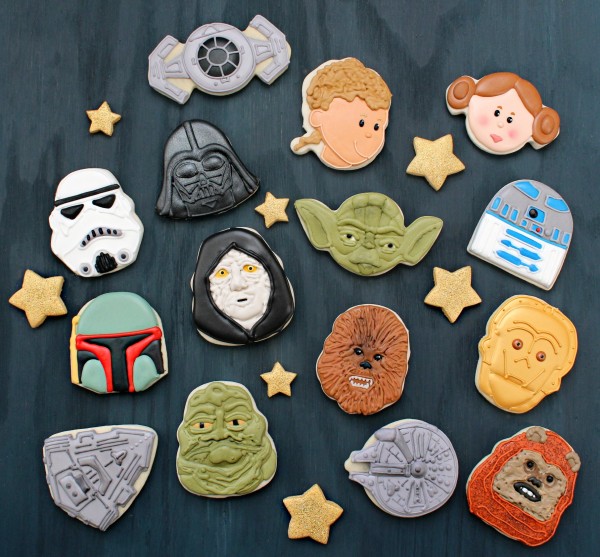 Many of you have probably seen these cookie cutters.  They came from Williams-Sonoma, and I bought the first set as soon as I learned they existed.

I was SOOOO excited about them, UNTIL I used them.

I just wasn’t feeling the little pushy thing on top.  So, when the next set came along, I didn’t even consider buying them. 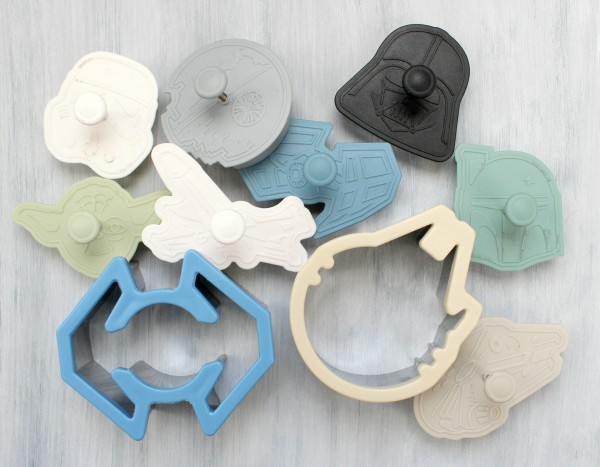 Of course, I eventually ended up with them AND the sandwich cutters, but only because my brother picked them up for me when they went on clearance.

In the end, gift or not, I  didn’t warm up to them. So, in true country-kid fashion, I came up with another way. I used Halloween and Christmas cutters to make my own version. 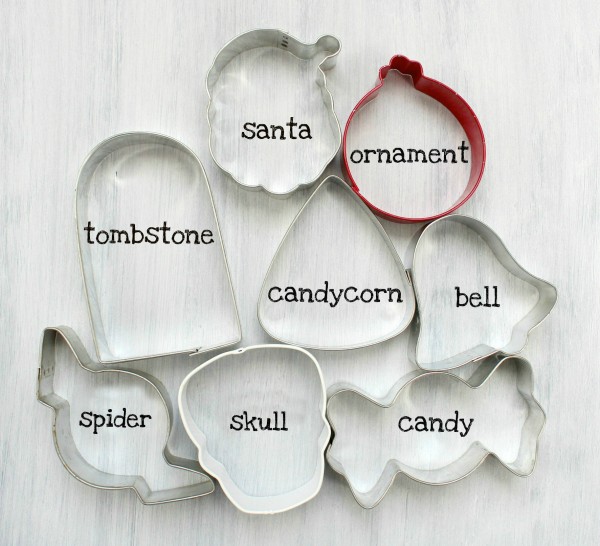 In Texas, we call that “Southern Engineering”. There were the good guys… 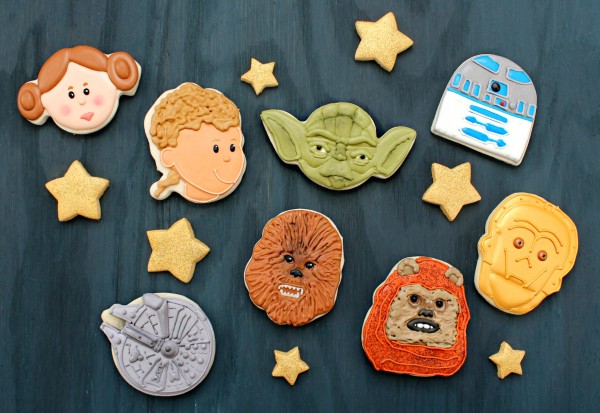 and the bad guys, of course. 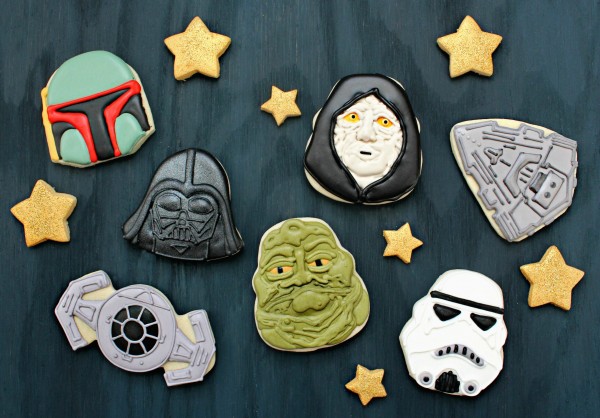 And if I hadn’t stopped myself, there might have been ten more.

The skull was the most useful cutter of the bunch.  With a little trimming, I was able to make Jabba, C-3PO, an Ewok, Stormtrooper, AND Emperor Palpatine.  I’ve also used it to make Darth Maul in the past. 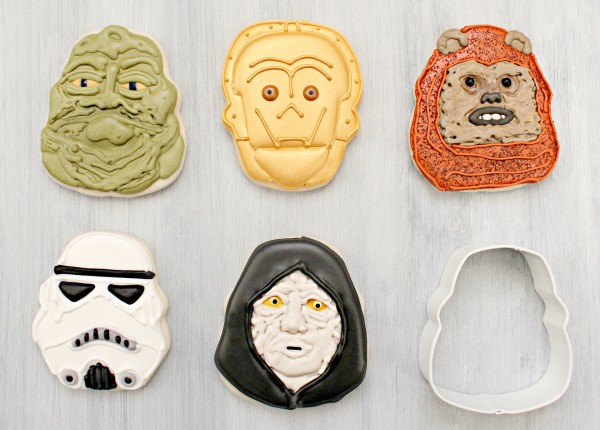 A  tombstone became Boba and R-2, 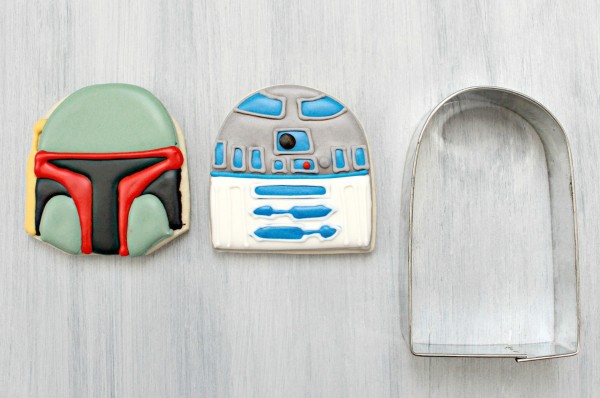 and my Wilton spider made a great Princess Leia and Yoda. 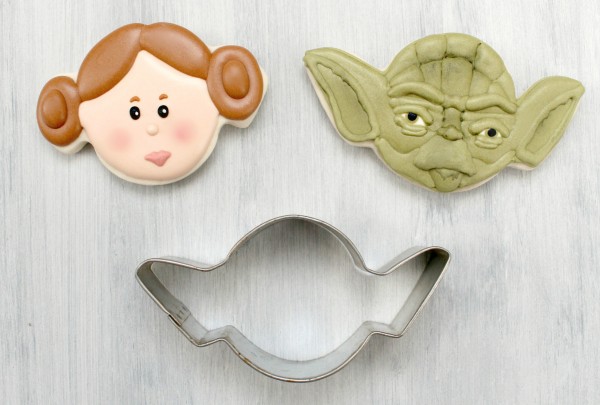 Can you believe that Aniken and Chewbacca were actually Santa? 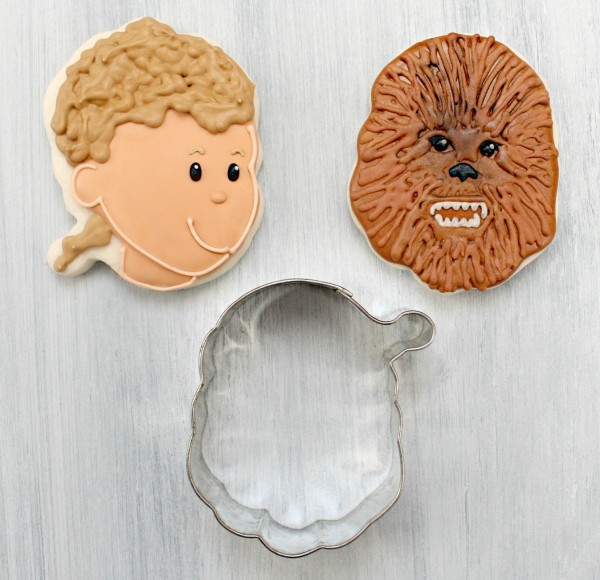 I was even able to make an Imperial Cruiser and fighter, Darth Vader, and the Millennium Falcon with a candy corn, candy, bell, and Christmas ornament. 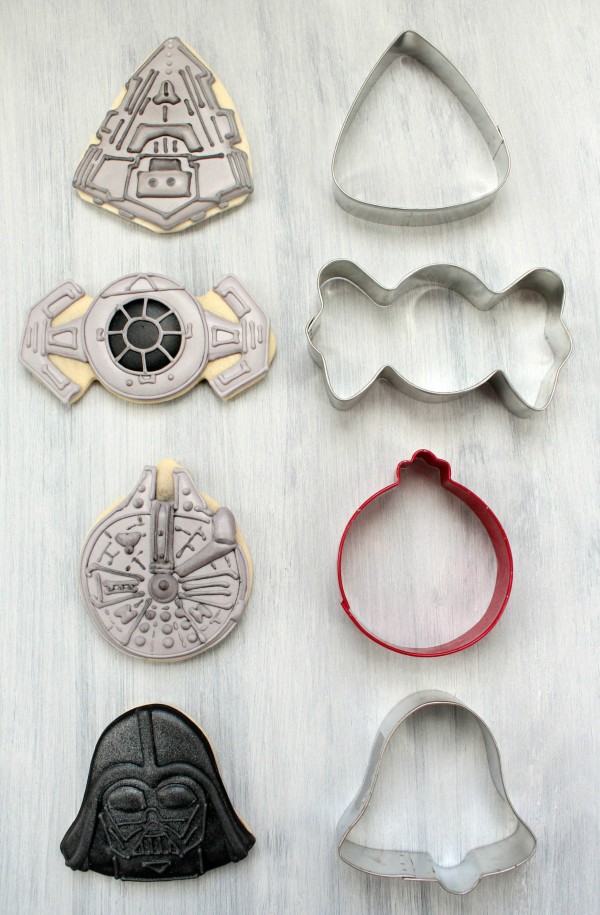 Did I mention I am a nerd? I just can’t help it. These guys are old friends. 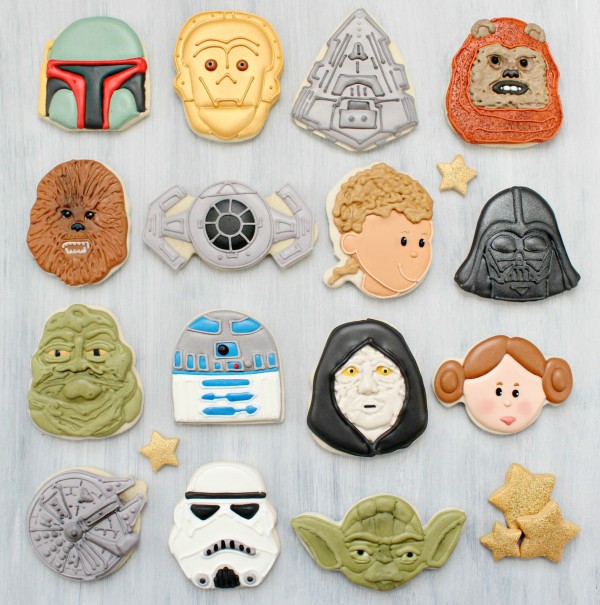 Each time I make these, they get a little better. This is my best Yoda and Jabba to date. I also decided that adding a little lustre to ol’ Darth gives him a lot of depth and is way more interesting than a flat black cookie. 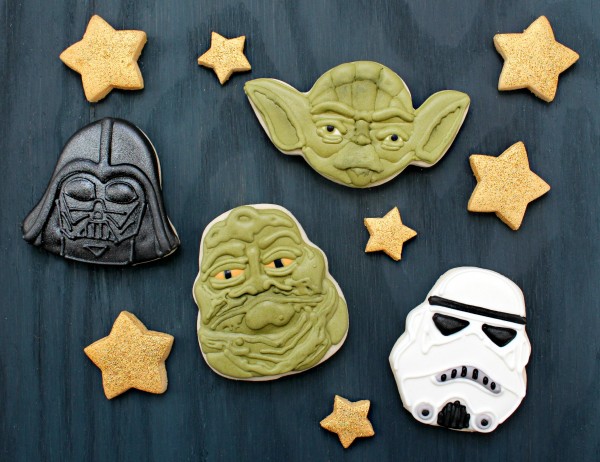 So, this, folks, is how you make Star Wars cookies, even if you missed the not so great cutters. I’m hoping that one of these days, mine will become a collector’s item and I can sell them on Pawn Stars for a huge amount of money. Too bad I threw away the box!

If you’re a non-nerd, forgive this little geek moment.  Hopefully this will at least come in handy if someone asks you for Star Wars cookies.

And all you DIE HARD fans, please excuse any inaccuracies there might be.  I took a few liberties with some of the characters to simplify them.  Don’t be mad at me.

Just out of curiosity,are you a Star Wars fan? Who is YOUR favorite character? I’m a Yoda girl myself, how about you?